Scott Howell has put together a new ad for Republican Jerry Kilgore, and it looks like the Kilgore campaign is getting their money’s worth. 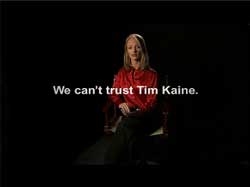 It’s actually a series of three ads. Each of them exploit somebody’s death for political gain. At least two of them depend on the viewer’s lack of knowledge of the legal process and fail to presents some basic facts of the topic at hand, as Martin Johnson points out on SouthNow.

But none of that matters. The average voter watching an ad in which Lt. Governor Tim Kaine is all but accused of murder, complete with harshly-lit black and white stills with photos of the deceased loved ones, their mind is made up. Kaine might be right, and Kilgore might be a sick son of a bitch for running these ads, but, with these ads, Kilgore wins and Kaine loses.

(Incidentally, attorneys should have a shiver run down their spine at the idea that their former clients’ actions can be brought to reflect upon them.)

Now, you’d think that the Kaine campaign would have anticipated these ads. I did, and what do I know? But their response ad sucks. It’s worse than useless — it’s a waste of money.

Once the Kilgore campaign runs an ad like this, there’s clearly no longer any need to abide by any basic concepts of fair play, truth, or kindness. So stop it.

The Kilgore campaign has demonstrated their understanding of how to win, which is by keeping Kilgore as far out of the public eye as possible. Kilgore’s face and voice appear only for the briefest bit of time, in order to satisfy legal requirements. They’ve likewise demonstrated that they understand that Tim Kaine’s greatest weakness is his position on the death penalty. They’ve combined these two elements into a single ad, which is, cinematographically- and politically-speaking, excellent.

So what can the Kaine campaign do?

This campaign is now a knife fight. The last man standing wins. Tim Kaine can lose with dignity, or he can win fighting. I advocate the latter.