Media consultant Scott Howell is a mighty smart guy. In just the past few years, he’s demonstrated his talent in the political realm by running winning media strategies for guys like Sens. John Thune, Jim DeMint, Norm Coleman, Saxby Chambliss and Jim Talent. He even produced TV ads for the Bush/Cheney campaign in 2004. Though Howell’s no newbie, he’s really just made a name for himself in the past few years. A couple of his ad campaigns, in particular, landed him — and his candidates — in the spotlight.

One of them was for Sen. Saxby Chambliss. Sen. Chambliss managed to unseat Democratic incumbent Max Cleland in 2002, with the aid of Howell. Cleland, as you likely know, is a hero of the Vietnam war — he left three limbs on the battlefield. He was elected to the U.S. Senate in 1996. Though Cleland has a great deal to his name, his most well-known attribute is that he has given a lot for his nation, just a medevac away from making the ultimate sacrifice. Between his military and public service, he’s the very model of an American patriot. Scott Howell knew that Chambliss would have a hard time outshining Cleland. Chambliss avoided Vietnam (he “blew out his knee playing football” in law school, while Cleland was fighting for the U.S.), so rather than build Chambliss up, Cleland had to be torn down. Howell put together a tough TV ad featuring photographs of Osama bin Laden and Saddam Hussein, with a voiceover accusing Cleland of lacking “courage” in the face of terrorism. The spot worked, and is widely credited with turning the tide against Cleland, assuring Chambliss’ victory. 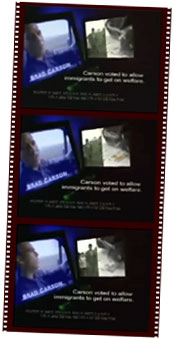 Another well-known Scott Howell ad was the “black hands” piece — as it’s now known — that he created for now-Senator Tom Coburn in his 2004 race against Democratic Rep. Brad Carson. The two were running a tough, close race for the open seat, and, come October, it was anybody’s race. Scott Howell put together an ad attacking Carson. In the commercial, two TVs were displayed — the one on the left showing excerpts from Carson’s TV ads, the one on the right showing juxtaposed images, intended to contrast with Carson’s claims. Halfway through the ad, the narrator accused Carson of not being tough enough on immigrants or Oklahomans on welfare. Right when the word “welfare” was spoken, the television on the right displayed a pair of obviously-black hands, counting through a stack of cash. The message was that Carson, a Democrat, was on the side of poor, black, urban Oklahoma City residents, a demographic seen by some white centrists as an economic drain. Carson cried foul, but that only served to reinforce his opponent’s message, and he lost to Coburn with 47% of the vote.

What Howell does so well is use code words and coded concepts, crafted such that the target audience will pick up on them while they’ll be ignored by those who aren’t clued in. President Bush’s speechwriters are particularly good at this. Bush gains support from evangelical Christians by doing things like announcing his opposition to Dred Scott on the topic of Supreme Court nominees and using phrases from hymns and moderately-well-known Bible passages, speaking of “hills to climb,” seeing “the valley below,” and using the phrase “I believe” regularly.

There are a couple of advantages to using such code words. The first advantage is that the message isn’t cluttered up: a candidate can give a straightforward speech on Supreme Court nominees, while dropping in phrases that tell ardent opponents that he’ll only appoint abortion opponents. The second advantage is that it provides plausible deniability: that candidate could deny that he’d apply a litmus test because, after all, he never said that he would. He’s only created a strong impression that he’d do so and, even then, only among those who recognized that Dred Scott means “fetuses are humans with full rights.”

On December 1, Virginia Republican Jerry Kilgore announced that Scott Howell had joined his campaign for governor.

Hiring Howell sent a strong message to Kilgore’s opponent, Lt. Governor Tim Kaine. Howell’s reputation, fresh off the November elections, had been cemented as a guy who pulls no punches, who is willing to tap into voters’ deepest fears and most closely-held stereotypes in order to get the few thousand extra votes that it might take to win.

Howell appears to be doing his part for the Kilgore campaign. Just a couple of weeks ago, Kilgore’s campaign announced that they’d established a “steering committee” of 90 black Virginians, which they presented as evidence that they were seriously courting blacks, a traditional Democratic demographic. Richmond’s top black newspaper, the Free Press, reviewed the list of people, concluding that the group consisted of “dyed-in-the-wool Republicans who are as loyal to their party as Yellow Dog Democrats and have little track record of success in garnering black support for the GOP.”

When the Kilgore campaign was confronted with the Free Press‘ response, spokesman Tim Murtaugh had a response prepared. He described the African-American paper’s response as “reacting violently.”

Violent. That’s a Howell code word. There was nothing about the response that would make “violent” a reasonable description, but the phrase “react violently” is not so bizarre that the average Virginian would sit up and take notice. But, as with the “black hands” ad in Oklahoma, the use of this word established a connection between the sort of black people who support Tim Kaine (“violent”) and the sort who support Kilgore (implicitly not violent). The message wasn’t cluttered (no overt racism), and there remained plausible deniability (“react violently” isn’t an unheard-of expression) — standard Howell.

In Saturday’s debate between Tim Kaine and Jerry Kilgore, another Scott Howell line surfaced. One thing on which all attendees appear able to agree is that Kilgore was very well-rehearsed. Though I did not attend, some friends were there. They told me that Kilgore seemed to be reciting lines, rather than speaking off the cuff. He’d clearly spent a lot of time drilling on exactly what to say, so that he wouldn’t make any gaffes, as he had during previous meetings between the two candidates. His rehearsals paid off, though one of his lines stuck out.

Kilgore asserted that Richmond City schools are the worst-performing in all of Virginia, attributing this to Tim Kaine’s time on City Council. Now, if that were true, that would be interesting. But it’s not true, not by any metric that I have considered. No matter how you slice the data, the schools were OK in the early 90s, and improved a great deal during Kaine’s time on Council in the 90s. Surely Kilgore’s research staff was well aware of this when they were preparing his comments. Why would they put in something so easily disproved?

It’s surely another bit of Scott Howell’s work. There is no city in Virginia so readily identified by the average citizen as having a high black urban population as is Richmond. And, without looking it up, I’ll say that it’s extremely likely that black students in Virginia tend to score lower on standardized tests than white students. (Here in Charlottesville, many black students’ parents were forced to drop out of school because of Massive Resistance, so they can’t get the sort of assistance from their parents that white students can.) I’ll bet most people would probably also guess that black students are lower-performing than their white counterparts. Kilgore’s statement preyed on a common, but racially-based assumption: that must be true, because Richmond has all those blacks.

The message wasn’t cluttered (Kaine is bad for kids) and there remained plausible deniability (all he did was mention Richmond, not blacks).

This is what Scott Howell does, and now Howell does it for Jerry Kilgore. It’s low-key, it’s not going to be noticed by the sort of people that Kilgore doesn’t want to notice, and anybody who points it out can be safely dismissed as simply race-baiting. A campaign as well-funded and as important to the RNC as Kilgore’s campaign doesn’t say anything off the cuff — they have a message and a vocabulary, honed through polling and research, and they stick to it. I’ll be interested to keep an eye on the Kilgore campaign’s message on matters of race in the coming months, to see where these code words lead us next. Howell is good at what he does — he may be the best — and no doubt this will be effective.

7 replies on “Howell and Kilgore, crafting the message.”