NBC Nightly News’ second story tonight is about the growing dissatisfaction with Secretary of Defense Donald Rumsfeld among the American public and Republican officials. If this sounds familiar, it’s because we just went through this earlier this year. Apparently, NBC lacks an institutional memory, because the 4-minute story (unusually long for network news shows) didn’t contain a single mention of the fact that we’ve already been here. This time, it’s Sen. Chuck Hagel, Sen. John McCain and Norman Schwarzkopf who have expressed dissatisfaction with Rumsfeld, but it doesn’t matter. 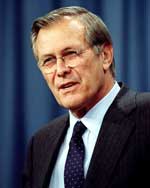 Remember how the White House handled this last time — they did nothing. The President didn’t acknowledge the criticism, but went out of his way to laud Rumsfeld for doing great work with his war in Iraq. That was it. There was no need to react, no need to acknowledge the criticism, because the Republican control of the federal government prevents Bush from being in any way accountable.

Expect the same results this time. Those who realize that Rumsfeld is grossly incompetent can shake their fists and yell at the White House, but it’s not going to do a bit of good. Rumsfeld and Cheney are as thick as thieves, and it is they, Rove and Rice who serve as the center of power in Washington DC (with Bush carrying out their wishes, presumably). This little group would be seriously harmed without having Rumsfeld on hand, specifically as Secretary of Defense. Whatever the political cost of retaining him — which isn’t very high, I’ll warrant — it’s far preferable to having to function without him.