A few days ago, I went to Kroger to buy groceries. They had a lot of things on rather-impressive sales, so I found myself buying a half dozen boxes of cereal, otherwise-expensive spices, a variety of scary meats, and similar things that I would not normally purchase. Among these purchases was a pair of frozen dinners.

Now, I don’t buy prepared foods. I fire up at least 2-3 burners every night and fix something proper. But every so often, I’m too busy to make dinner, or I’ll simply forget until rather late at night, so I figured that a pair of these uber-discounted frozen dinners might be useful and, if nothing else, interesting.

Last night, I ate one of them: the “Banquet Hearty One Boneless Pork Rib with Mashed Potatoes and Corn.” 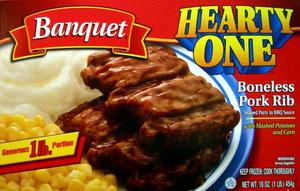 Banquet is wholly owned by ConAgra, a big and scary company with which few people are familiar. They’re the #3 seller of retail food in the world, owning brands like Armour, Butterball, Hebrew National, Chef Boyardee, Healthy Choice, La Choy, Jiffy Pop, Peter Pan, Egg Beaters, Swiss Miss, and many, many more. As explained by Eric Schlosser in Fast Food Nation, their meat is produced under disgusting, dangerous circumstances, leading to illness of thousands of Americans each year. I try to eat meat a few times each week, but on my student budget, I can only afford the generic scary meat at grocery stores, something that runs against my grain. The alternative is to lose weight and have a less healthy diet, so scary meat it is. Even Banquet Hearty One Boneless Pork Rib.

Based on the box, it didn’t look like too bad of a meal. Frozen corn, reconstituted potatoes, and a couple of slabs of pork. Last night, I ate it. 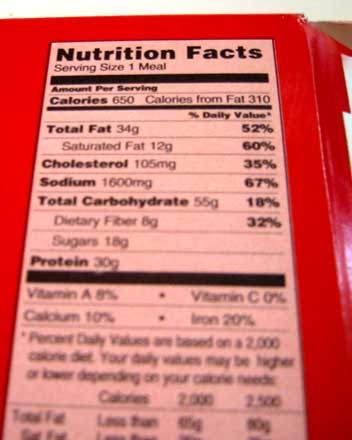 Before cooking this 1lb meal, I read over the nutrition facts. I was boggled. 650 calories is reasonable for dinner, but 310 of those calories are from fat, which is over half of how much I should be having each day. 12g of the 34g of fat is saturated, or 60% of my daily allowance. This meal has an eyeball-bulging 1,600mg of sodium, or 67% of the recommended daily intake. What it makes up for in unhealthy attributes, this meal more than makes up for in its lack of desirable elements: no C, 8% of A, 10% of calcium, and 20% of iron.

But, even having read the nutrition facts, I’d bought it, and I was damned well going to eat it. I followed the multi-step (!) microwaving directions, and watched the little plastic tray spin around in my microwave for a while. When the process was done, it looked a little like this: 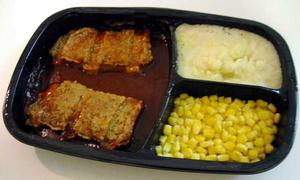 Upon comparing my meal to the picture on the box, I could not help but notice that the two weren’t terribly simlar. The corn appeared as promised, but the mashed potatoes looked considerably less creamy than the advertised potatoes, and the meat… Well, the meat was a bad scene. 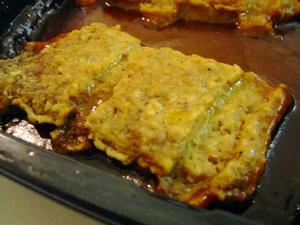 Ugh. The color was all wrong, and the two flaccid chunks were floating in a sea of “molasses, wheat starch, calcium sterate, soy flower, [and] hydroxylated soy lecithin.” I found the shape rather curious — the bones running through each slice didn’t look quite right. Inspecting the box, I read that these were, in fact, “shaped patties,” consisting not of cooked pork, but instead twenty two separate ingredients that included, tellingly, both pork and “textured soy protein concentrate.” (Which sounds suspiciously like TVP, to the horror of vegetarians everywhere, no doubt.)

To my retrospective horror, I ate everything on the tray. I started with the potatoes, which were not objectionable, provided that I did not think of them as potatoes, but instead a goopy salt-and-butter mixture. The corn was your basic frozen corn. The meat was sketchy, at best. In one mouthful, I found a shard of bone, which was disgusting enough that I had to reconsider if I could continue. (After some brief consideration, hunger won over common sense.) The pork didn’t have any taste of pork, because it was floating in the Molasses Sea. Instead, it was sweet and chewy, and oddly crunchy at one end of each patty.

When finished, I threw away the tray (which was rather an alarming feeling; I’m accustomed to washing my dinner plate, not tossing it), cupped my quietly-protesting stomach, and tottered off to bed, already regretting what I had done to my body.

I don’t know how common that it is for people to consume these frozen dinners, nor do I know how representative that the Banquet Hearty One Boneless Pork Rib with Mashed Potatoes and Corn (damn, that’s a long name) is of frozen dinners on the whole, but if my experience can be extrapolated, it’s no wonder that 60% of Americans are obese and consequently unhealthy. Between the nasty stuff in this food and the good stuff that’s absent, I’m sure that I’d screw myself up good if I made a habit out of eating these things. Not that there’s any danger of that.

Next up: Banquet Hearty One Salisbury Steak with Gravy, Mashed Potatoes, and Corn. Someday, if I’m feeling brave, I’ll try the Hungry Man All Day Breakfast. But probably not.