UVa law student and Virginia political blogger Mike Stark got roughed up by Allen supporters — possibly staff members — and the whole thing was caught on camera. Henry Graff reported for NBC 29 that Stark was trying to talk to Allen during the media Q&A portion of the event here in Charlottesville today when, in Graff’s words:

He wasn’t able to get near the senator as he was tackled by three men wearing Allen stickers, presumed to be staffers. He was pushed and manhandled and ended up on the floor, near windows at the Omni.

The video of the incident certainly seems to confirm NBC 29’s account. Allen observed the entire thing and made no attempt to take control of the situation.

The question, then, is whether the three men who assaulted Stark were paid Allen thugs or just random assholes. Here are screen captures of each of the three men’s faces: 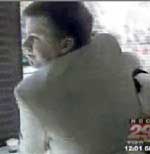 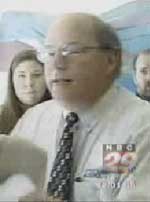 Does anybody recognize any of these three men? Here’s hoping that they’re a) Allen staffers and b) that Allen doesn’t have the common sense to fire them immediately. If so, this would mark the end of his campaign.

5pm Update: The Hook reports that one of the three men was a senior campaign employee.

11/01 Update: The writer of The Hook article informs me that the man that he identified as a campaign employee was not one of the three men shown above.