In August of 2005, I wrote that I’d be perfectly happy blogging about any number of things other than politics. Blogging about politics as an end, rather than a means, isn’t just boring, but I’m not sure that it’s particularly productive. So I’ve decided to make an effort to write more about the sort of things that politics aims to affect and improve. One of the things that I’d be very happy to write more about is urban planning.

The physical structure of our society is a topic that fascinates me. How we arrange our towns and neighborhoods and houses both says a lot about us and strongly affects how we relate to one another. As Charlottesville sprawls out and engulfs Albemarle County, something that I see a lot of is bad planning. Development patterns that discourage socialization, worsen our nation’s reliance on foreign oil, or endanger people’s lives. I intend to write about examples of this periodically.

The topic of today’s post is the new habit of curved intersection corners. One of the worst area offenders on the newly-widened Airport Road, just north of Charlottesville.

Airport Road is, itself, quite a problem. What was a two-lane road connecting Rt. 29 (a major, albeit urbanized, highway) to the tiny Charlottesville/Albemarle Airport is now a four- to six-lane monstrosity. The advertised purpose of this expansion is to create a new multi-modal passageway from the airport to the burgeoning population center right there on Rt. 29. It is, after all, the first road that people see when they fly into town. So there are bike lanes, sidewalks, and businesses are beginning to sprout up along the street. The whole affair is less than a mile long.

But the whole thing doesn’t make any sense. For starters, the 55mph speed limit. Who wants to walk along a sidewalk three feet from 5000lb SUVs whizzing by? Nobody, of course—it’s dangerous. Without lowering the speed limit, creating on-street parking (the line of cars serving as a safety barrier for pedestrians), and planting trees on the grassy strip between the road and the sidewalk (again, a safety barrier), few people are likely to feel safe or even comfortable on the stroll.

For the sake of argument, let’s pretend that pedestrians are going to take this route to Rt. 29. This is where the over-designed intersection comes in. Here are three photographs of where a side street intersects with Airport Road. The first photo is from the perspective of a pedestrian preparing the cross, the second from across the road at an angle, and the third head-on from directly across the road. 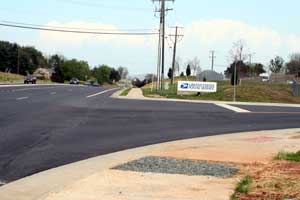 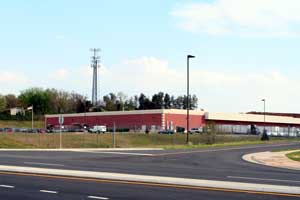 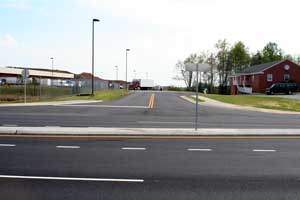 The strange thing, as you can see, is that this street corner has no actual corner. There’s only a pair of huge curves. The purpose of these curves are simple: to prevent cars from having to slow down. So on the one hand, cars are presented with a stop sign. On the other hand, the road is clearly engineered to allow them to round that corner at no less than 35mph. Why do people run stop signs? Because they don’t have to stop. Why should they, when all engineering signs point to keep going?

Pedestrians aren’t stupid. A pedestrian facing this street crossing thinks dang, I’m gonna get mowed down if anybody turns in or out of this road while I’m crossing. (Pedestrians who already feel unsafe walking along this road.)

The second problem with this huge curve is the daunting task of crossing it. Walking across a road is not safe. We teach toddlers that they need to be scared when crossing the road. Do so quickly, do so at the narrowest available point, and look both ways while crossing. This intersection shows all the symptoms of having been engineered with crossing in mind. There are crossing pads that are both lowered for wheelchairs, red in color for the visually impaired, and stippled for the blind. Looking at the first photograph, it’s clear that some thought went into the crossing location—pedestrians can’t continue straight down the sidewalk, across the intersection, and onward. Instead they have to curve to the right, cross at the pad, curve to the left, and carry on. Why is that?

Because the curve of the intersection is so huge that the pedestrian would have to spend a dangerously long time crossing the intersection straight through. I paced off this intersection. Crossing at the prescribed location is 21 paces, or about 63 feet. The width of the road itself, before it curves out? Just 9 paces, or about 27 feet. I didn’t pace off the width direct from sidewalk to sidewalk, but I estimate it’s 75 feet.

Engineering curves into this intersection, rather than traditional 90° angles accomplishes just things:

There are no benefits that come of curving the intersection.

So we have a street that pretends to be multi-modal but is clearly designed only for automobiles with intersections that pretend to be accessible and safe but are actually designed to be as dangerous as possible.

The solution? Intersections within the urbanizing areas of the designated growth regions of Albemarle should be required to have 90° corners. Street should be fit into a standard class of the street hierarchy (loop road, boulevard, street, alley) and be engineered accordingly.

Good urban planning isn’t innovative. It consists largely of creating neighborhoods, communities, and even intersections as they would have been designed fifty years ago. That’s not real hard to do.