For the past two days, I had a brief but undistinguished career as a roadie 1 for the Rolling Stones.

For reasons not worth explaining, I was asked to work on the crew setting up for the Thursday Stones show here in Charlottesville. Because I’m stupid, I said “yes.” (Both my mother and I tend to do stupid and/or foolhardy things on the basis of being able to “write about it someday.” And so here we are.)

When I asked what I’d be doing, I was given a rather vague explanation, with “carry things” being the only really solid explanation. Given that most “work” that I’ve done for some years has consisted of little more than bravely manning a keyboard, this seemed like a good occasion to put my standard work on hold and try out something new for a couple of days.

Upon my arrival at 7:45am, Sunday morning, I was assigned my job: taking out the trash at the catering tent. This rapidly expanded to include a good number of other exciting tasks within the catering tent, including cleaning the tables, sweeping the floors, and doing the dishes. My two options were to tell them to bugger off, or to shut up and do the work. On the one hand, I have no interest in doing dishes or cleaning up after a hundred-person set construction crew. On the other hand, I don’t know what makes me so special that my hands cannot be dirtied by a little dish water, and that my t-shirt cannot be stained by garbage juice. Feeling a curious combination of over-confidence and self-loathing, I allowed myself nothing more than a raised eyebrow before I grabbed a dishrag and got to work. 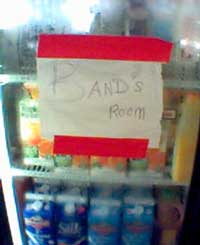 I worked a thirteen hour day on Sunday. The crew came into the tent alongside Scott Stadium for three meals each day, and it was the job of a dozen of us to feed them and clean up after them each time. I worked with a colorful bunch, all of whom lived far away, save for one fellow who just moved to Charlottesville. All were great to work with, despite the few slackers in our midst.

The crew themselves were a particularly interesting bunch. The group was 90% male, and every one of the females could easily kick my ass. The majority were young (20-40 years old), tattooed and pierced. A couple of dozen were grizzled-looking tour veterans, in their 60s, with bushy beards and big bellies. Some were crane operators, some joiners swathed with climbing gear, and some truck drivers. All were unfailingly polite. At least several made a point of pulling me aside and thanking me for the food, saying how delicious that it was.

I must note that the food really was marvelous. Between eggs made to order, the smoothie bar, the broad selection of vitamins and supplements and the fresh-made meals, the crew is treated very well, indeed. 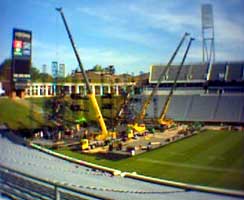 My favorite sighting: A grizzly, bushy-bearded 60-something ironworker wearing, without a hint of irony, a t-shirt commemorating the 1990 New Kids on the Block “Magic Summer” tour.

Monday I worked until 3pm, which was when my replacement showed up. By the time I ended my brief, inglorious career as a Rolling Stones roadie, I was well ready to be done. And I saw the easiest of it; Wednesday is when things will get really busy. That’s when the Stones come to town, and they and their 300-person entourage will have to be fed, too. On early Friday morning the crew works from 11pm until 7am. I can’t say that I’ve plumbed the depths of my abilities, but I speculate that they don’t extend to an overnight catering gig for 400-500 exhausted steel workers, stagehands, security guards, rock stars and their personal assistants.

And so ended my career as a roadie for the Rolling Stones. Today I began a new job (more on that some other time) that’s more my speed. I can’t see any future for me on the road, but I have to admit that I can see the attraction. Great co-workers, exciting circumstances, a sense of purpose — there’s lots to love. And did I mention the food?

1. Note that my use “roadie” is a flagrant abuse of the word, given that it was here in Charlottesville, setting up for a single concert, with no danger of actually going on the road with them. But I will inevitably come to describe this as “the time I was a roadie for The Rolling Stones,” fabulist that I am, so why not start now?

7 replies on “The time I was a roadie for The Rolling Stones.”