There is a peculiar breed of Republican, currently dominant in the party, quite unable to connect the dots, literally or figuratively.

In the matter of the evolution of the species, including mankind, these Republicans offer faux scientific objections not to natural selection (which is the “theory” in “the theory of evolution”), but to the fact of evolution itself. An frequent objection is that “the intermediary steps are missing — there are no ‘in-between species.'” There was actually some logic to this, a century ago. Imagine a time when only three early hominds were known: Homo erectus from one million years ago, Neanderthals from 250,000 years ago, and modern man. We might plot the advance of these species over time like such:

A reasonable person might say well, that’s nice, but you’re missing the in-between species — there are missing links. And reasonable people said just that. So more digging was done, more research on bone fragments, and a few decades later we’d filled in the gaps with newly-discovered ancient species:

That is certainly compelling but, still, some may say that looks pretty good, but we can’t be absolutely certain about that curve without filling that in more. Decades later, all of those gaps had been filled in, too, giving us this modern representation of the ascent of man:

Now there can be no question about how to connect these dots. But these Republicans continue to insist that there are gaps, “missing links.” Of course, there will always be missing links. We’d require a fossilized hominid to represent every generation for the past million years to improve on this. (As Bill Bryson points out in “A Short History of Nearing Everything,” if everybody in the United States at this moment were to drop dead simultaneously, approximately 75% of a skeleton’s-worth of bones would become fossilized. Evenly distributed, that’s one bone per 22,970 square miles. Good luck with that.) It’s simply disingenuous to claim that evolution is not obvious from such a progression. But anti-logic Republicans look at the line and scoff: Ha! That’s not a curve! Those points are so wildly dissimilar that only a fool would think they’re connected.

But this isn’t limited to evolution. Consider global warming. One need not look beyond the rise in temperatures in the past 150 years to see that the earth is heating up dramatically, yet there are still people who literally cannot connect those dots and insist that no such warming is occurring. That could be anything!, complains our Republican. Who’s to say that just because the dots on the graph are higher that temperatures have gone up? They also had a very difficult time connecting the dots after September 11th (“Bin Laden determined to strike in US“) and are currently having a hell of a time connecting the dots in the U.S. attorneys scandal.

First grade must have been rough for this bunch. They’d have a hard time knowing what to do with this connect the dots:

Why, that could be anything!, cries our Republican.

Don’t you think, we must ask our friend, it’s probably the Cat in the Hat?

Balderdash!, complains the Republican. You’ve settled on an outcome without even conducting the proper research. See here, I’ve discovered it’s not the Cat in the Hat at all! 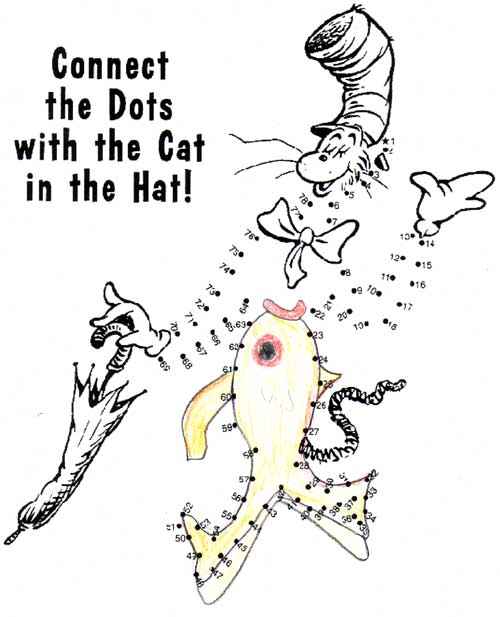 It’s clearly not a fish. Obviously, it’s the Cat in the Hat. Our Republican barely made any effort to connect any of these dots. Seeing that he’s not winning any converts with his initial theory, he tosses out a new one. 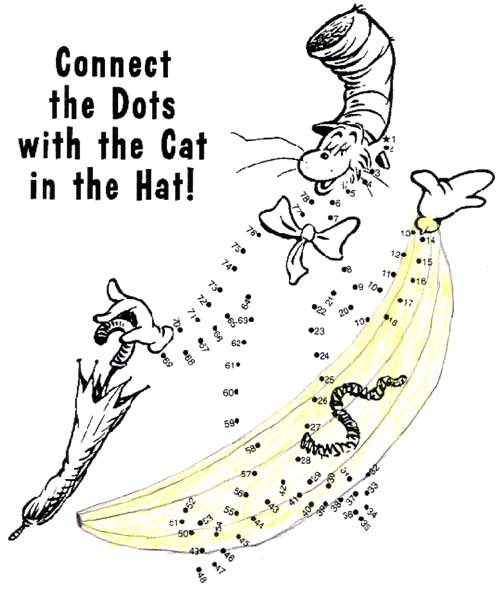 That’s not even vaguely close to connecting any of those dots. No effort was made. It’s not a banana. It’s not a fish. It’s the Cat in the Hat. See? 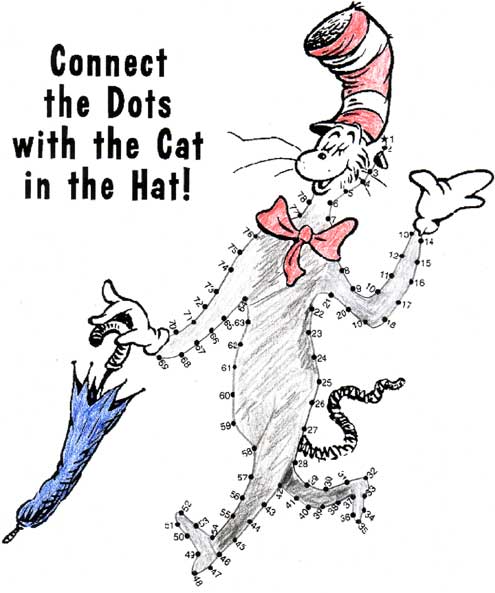 I saved a lot of time by, y’know, reading the title: “Connect the Dots with the Cat in the Hat!” But, just in case, I went ahead and connected those dots. And, what do you know?, my hunch was right.