Not my Mauser, but a Mauser, that looks basically the same as mine. Image from Wikipedia.

One of the toys that I received for Christmas is a 1948 Turkish Mauser from my brother. It’s a bolt-action rifle that fires 8mm rounds, has a five-round capacity, a 29″ barrel and a weight of 9.2lbs. It’s a beast. It’s certainly a lot more gun that I’m accustomed to, since my primary firearm has long been a Mossberg .22.

I test fired it this afternoon. It was interesting to load. I’m using surplus Yugoslavian ammo, from 1954. It comes in boxes of fifteen, with each five joined by a stripper clip. The five are jammed into two rows in the magazine from the top, the strip extracted, and the first round is chambered once the bolt is is closed. 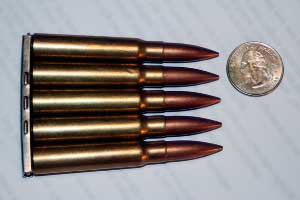 These are very large rounds.

I expected some kick when I squeezed the trigger, but it surprised the hell out of me when it came. It was as if I’d fired a shotgun. My shot went wild, my teeth snapped shut and my ears rang, despite the earplugs. Naturally, I immediately chambered another round and gave it another shot. A fraction a second later, a small explosion of debris burst up from side of the mountain a hundred yards in front of me. Fun. For comparison’s sake, I took a few shots with my .22. Considerably less fun.

Now that I know it works, I’m going to set up some targets on my impromptu range and have a little fun. I think I’ll skip the paper targets, though. I think I’ll want something a little more…explody.

Anybody looking to put a hole about yea big in that thing over there will find a Mauser a damned fine way to do it.