Ten years ago this minute I was sitting in a small lean-to in the Georgia Mountains, with six months of hiking yawning before me. One day previous my friend Jimmy had given me a ride from Charlottesville down to Springer Mountain, the southern terminus of the Appalachian Trail, and set out to walk to Maine. We had a hard time finding a hotel that would rent to a couple of 17-year-olds, but we eventually managed. The next morning we navigated our way through gravel roads until we found a parking lot. I struggled to pull on my 72 pound frame pack and together we walked along the trail to the marker indicating the beginning of the trip. 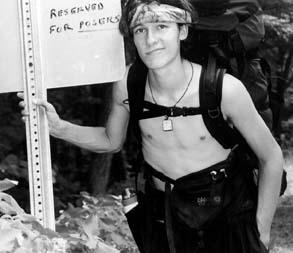 I did just a few miles that day, meeting three fellow thru hikers (as such extreme long-distance backpackers are known) who I’d come to know in the coming months. Days, weeks and months ticked by as I put the miles behind me. Georgia. Tennessee. North Carolina. The neverending miles that are Virginia. Come Harper’s Ferry, West Virginia I’d broken both of my feet — stress fractures — and had to take some time to heal. (That was when a schoolmate, Amber, rang me out of the blue and invited me to accompany her family to the beach for a week. She’s now my wife.) I got back on the trail after a month spent healing, though I had to start again up in New Hampshire, in order to make up for the lost time. I walked from Mt. Washington to Mt. Katahdin, Maine, ending up as one of the last people to summit that year, just before the snows started. I broke both of my feet in the Hundred Mile Wilderness, a couple of weeks before finishing, but I decided to bear it so I could reach Katahdin. I badly damaged my feet in the process.

I had to stop for the cold of winter, but come spring I started again in Harper’s Ferry, continuing where I’d left off. I broke them both again after a few weeks, took some time to heal, and hit the trail again.

By the end I’d managed to hike nearly all of the trail. I’m only missing a few hundred miles now. My feet remain broken or, at least, very badly healed. I haven’t finished the Appalachian Trail, though I intend to do so as soon as I figure out what to do about my feet.

The thing about not having finished is that it’s a chapter in my life that I can’t close. I’ve started something that my body hasn’t let me finish. It was supposed to be a six-month trip, something that I could do and then move on. Instead, one of the biggest things that I’ve ever attempted is something uncompleted.

In those months of walking, I learned a lot. I learned about self-sufficiency. About gumption. About who I am. And I learned a lot about this country; it’s hard not to when you’ve seen so much of it, one step at a time. But the hardest lesson was — is — failure.

We all have big goals — our own Katahdins, as Dan Bruce calls them. For thru hikers our Katahdin is, in fact, Katahdin. Life is easy, because there’s only one goal. Off the trail, there are often no Katahdins. My Katahdin is still Katahdin, because I haven’t reached it yet, not fair and square. I suppose that makes my Katahdin Mt. Washington.

I have to wonder what my next Katahdin will be. I can only imagine.