Josh Marshall has an excellent post on Talking Points Memo that’s all about one Mitchell Wade and the defense contracting firm that he owns, MZM, Inc. It seems that Mr. Wade purchased (through a shell corporation) the home of Rep. Randy Cunningham, a Republican member of the House Appropriations Committee’s defense appropriations subcommittee, for $1.7M, which was way over the market value. The San Diego Examiner discovered that the house sat on the market for 261 days before it finally sold for $975k. Poor Mr. Wade. Lucky Mr. Cunningham. 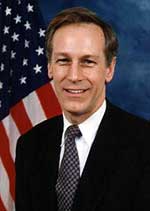 But, wait, there’s more. Mr. Wade had been unable to procure any new Pentagon contracts for a long while. Coincidentally, he had a sudden reversal of fortunes — he got tens of millions of dollars of new defense and intelligence contracts. Lucky Mr. Wade!

The name “MZM” is familiar to some Democrats in the 5th Congressional District of Virginia. Mitchell Wade gave $36,000 to Republicans in the 2004 election cycle, giving the maximum of $4,000 to a few lucky candidates: Rick Renzi, Katherine Harris, Randy Cunningham (our lucky former homeowner) and, who’s this? Why, it’s the Fifth District’s own Virgil H. Goode!

Yes, in April of 2003, Virgil Goode became the very second federal candidate to benefit from Mr. Wade’s largesse. But he did much better than that in total. MZM employees, apparently having taken a shine to Rep. Goode, were really quite good to Rep. Goode. Let’s take a look at his top ten contributors:

Did I mention that Virgil Goode is on the House Appropriations Committee?

I’m left with a whole lot of questions. I wonder if Rep. Goode is as grateful to MZM as is Rep. Cunningham, and I wonder how that has affected his votes? I wonder if Rep. Goode aided Rep. Cunningham in providing Mitchell Wade with his tens of millions of dollars in new defense contracts? I wonder if it concerns Rep. Goode that he’s taken such a tremendous amount of money (considerably more than the amount that the average family in the Fifth District makes in a year, if my memory of the districts demographics serve me) from a man embroiled in a pay-to-play scandal? I wonder if it concerns Rep. Goode that a corporation with whom he’s proud to say that he has a close working relationship (in the past two months it’s been reported that Goode “was instrumental in MZM’s decision to locate an office in Martinsville,” from the Roanoke Times and that he arranged their purchase of a the old Technicolor building in Greene County, from the Daily Progress) is embroiled in this scandal? I wonder if Rep. Goode has, like Rep. Cunningham, taken any additional money from MZM, its employees, or shell corporations owned, established or substantially invested in by MZM’s employees or representatives?

I wonder if any Virginia journalist has the budget to look into this?

10 replies on “Virgil Goode and MZM: There’s a story here.”